Learning through laughter – an interview with Keith Palmer, director of The Comedy School

Learning through laughter – an interview with Keith Palmer, director of The Comedy School

The Comedy School has offered high quality arts experiences for people within and outside of the criminal justice system for 20 years and is the only the only organisation of its kind in England led by a black person. It aims to raise the profile of the various uses of comedy, from stimulating personal creativity to encouraging social skills and improving literacy. This is achieved through its workshops, performances and arts projects.

Arts Council England’s Creative Case for Diversity states that the approach to diverse arts must consider the following progressions: equality, recognition and a new vision. All three are vitally important in working towards a more just and fair representation of diverse groups within the arts.

There has to be a new conversation that attempts through various means to resituate diverse artists, both historically and theoretically, at the centre of British art – whether that is the performing arts, the visual arts, combined arts, music, literature or film.”
– Arts Council England, What is the Creative Case for diversity?

National Criminal Justice Arts Alliance’s Rebbecca Hemmings spoke to founder and director of The Comedy School, Keith Palmer, to get a full picture of the organisation’s work over the years.

How did The Comedy School begin? 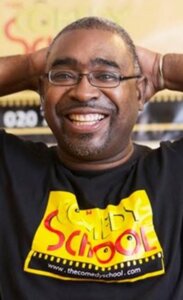 In the 90s I started working as an actor and following that I discovered stand-up comedy. Though I soon found that I wasn’t very funny! At the time there were no formal pathways to learn about stand-up comedy and I quickly decided that I needed someone to teach me – I was going to find someone I respected and give them the choice to mentor me or have me stalk them! Once I found effective mentors, I knew I had to create something so others had a place to learn. It was then, in 1998, that the idea of The Comedy School was born.

As a drama facilitator I had led participatory workshops for many organisations such as The Prince’s Trust, The Actor’s Centre and Royal Festival Hall. I was also a community development worker for the National Youth Theatre and worked in prisons. It was through these experiences that I saw how comedy could be used as a tool for change.

Who is The Comedy School for?

Our work is primarily for comedians and workshop facilitators. However, we work with a wide range of participants from primary school children, to people in prisons, youth offender institutions and mental health secure units. We also work with the commercial sector to ensure we can cover our running costs.

We set up to raise the profile of the various uses of comedy for those wanting a comedy career and develop people using comedy as an educational and rehabilitative tool.”

We improve cognitive communication and performance skills, and introduce young people and those previously excluded from the arts to positive role models. We’re committed to enhancing the lives of people through comedy.

Can you tell us a bit more about the programmes you provide?

When people think of comedy, they often think of Michael McIntyre and Live at the Apollo. We see comedy as much more than that. Comedy is a rehabilitative communication and educational tool. We show people the different ways in which comedy can be used in different settings.

How do you work in criminal justice settings?

We use comedy in prisons to help teach functional skills, English in particular. In order to create comedy you often have to write it down and speak well in front of an audience. You have to be able to communicate well and connect with your audience.

We’ve worked with both prison residents and staff. Our underlying message is that communication taught through the arts is extremely valuable. It offers people a chance to do some self-discovery work which is done in a non-threatening manner.

Often our work is requested by governors, education departments, prison staff, prisons or the Prison Officers’ Association. We have also delivered work for the John Howard Centre, a secure hospital, and at HMP Broadmoor, which is a high security psychiatric hospital.

We have delivered a lot of partnership work. For instance, we have collaborated with Working Chance, an organisation committed to improving employability skills, and with Clean Break, a women’s theatre company that focuses on telling the stories of women affected by crime. For Clean Break we ran a funny women’s course.

Why is comedy important?

It’s simple – everyone loves to laugh.”

It’s a non-threatening medium, engaging and something we all do. Laughter offers a great way to start a conversation.

What are some of the risks when using comedy within criminal justice settings?

Okay, I’ll explain some of the mechanics of comedy. When telling a joke, there is usually a target – someone or something is normally the butt of the joke. Some people are not very good at getting laughed at and find it difficult to understand that this is part of the process. It takes a good facilitator to manage a situation where this difficulty arises. They have to help the person to look at themselves, see that no one is perfect, that everyone will be laughing at one another’s jokes/targets, and that everything is done in the spirit of learning.

Lots of people use humour to survive on the wing. Sometimes it’s the only way to get through it.”

What would you say to someone who is adamant that comedy has no place in prisons?

I would ask: do they believe in rehabilitation? Assuming they do, I would remind them that when these people return to the community, they are often your neighbours and might be living on same street as you. I would try to get them to understand that rehabilitation comes in many forms. If comedy works, why wouldn’t you use it as a tool for change? We know comedy can create positive change for people within the criminal justice system.

Can you tell us about the needs of the people you work with?

We work with a very wide range of people but if I was to comment in a holistic way, I would say that loneliness is a huge issue. We deem it imperative to create a sense of community in the work we do to tackle this. In addition, we encourage people to tune in to their emotions, to look at their communication methods, examine themselves and look at how they are perceived by others. Some people affected by the criminal justice system have not had to examine themselves.

I’ll give you an example – there was a 6 foot tall, big lad who had not realised he was often invading people’s personal space. He was in people’s faces but no one had told him. He would find himself surrounded by five police officers because they thought he was hostile – he just didn’t know that was how other people saw him.

So what we do is, allow people to see themselves through other people’s eyes in a non-threatening way.”

Can you tell us how you work to support the multiple needs of the young people you work with?

In young offender institutions, we are aware that there are more needs to take in to consideration and more constraints. Time is limited, as is access. We are unable to freely pass on information. Everything takes much longer to get across and we have to be patient. You have to be creative in how you work with them because of their complex needs. You will get a lot of no’s but we understand that.

This year, a production of ours called It’s No Joke addressed issues around weapons related crime and anti-social behaviour. It was seen by over 2,500 children in London.

With the rising awareness of youth violence there is more of a demand for our work but unfortunately we can’t always deliver because the finances aren’t always there. People would love to have what we do but as we are not core-funded, they have to pay for it.

Can you tell us about some of the challenges The Comedy School are facing?

Like most organisations, we want to be financially secure. Maintaining funding is always a challenge. We want there to be a legacy. We want to be nationally recognised and self-sufficient.

A lack of understanding of the benefits of comedy is often a big issue. Some people just switch off because they see it as a soft touch. We are different and not everyone wants to think about how ‘different’ works.

What are some of the highlights of your work so far?

This year we are celebrating our 20th anniversary. We have worked with many people that others have given up on, in high security prisons and in hospitals.

The Comedy School has worked with royalty, and provided entertainment for Nelson Mandela when he came to Brixton in the late 90s. It was also an honour to produce a sold-out tribute event for Felix Dexter at the Hammersmith Apollo in 2014.

What are the opportunities for the future?

I am continuing to build on the legacy of The Comedy School and show people the difference comedy can make in empowering people. We are creating a clear case for participative comedy and our organisation.

We want people to think of The Comedy School as the leading organisation that utilises comedy. We want to continue to stay ahead of the game and thrive. And finally, we aspire to have our own building.

How would you sum up The Comedy School’s experiences? 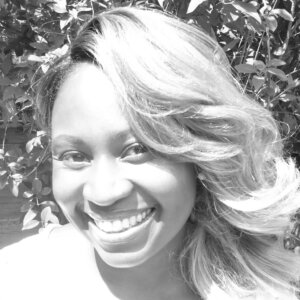 Rebbecca is the National Criminal Justice Arts Alliance (NCJAA) Development Officer. Her responsibilities include: building the membership of the organisation in local regions, connecting with stakeholders, training and promoting good practice.