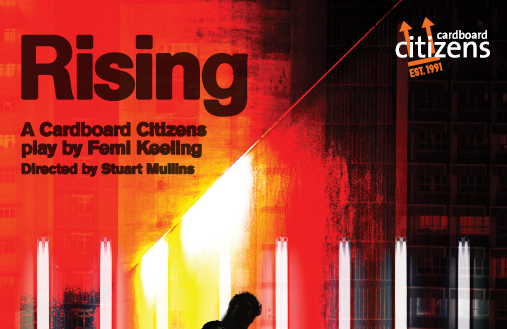 As part of the launch of the Mayor of London’s Winter Homelessness Campaign, Cardboard Citizens will perform Rising by Femi Keeling in the Council Chamber of London’s City Hall.

“Rising is the story of Terrence, who has just been released after a short prison sentence – he’s full of hope, but faced with battles against the system and demons from his past, he’s on the edge. He’s moving on, but is he moving in the right direction?”

Rising is a Forum Theatre piece, so the play will be followed by an interactive session where audience members at City Hall – and commentators online – will be able to step into the action and change the outcome of the story. There will also be a panel discussion with leading speakers on the issues of the play.

Viewers can comment and contribute to the debate from the Cardboard Citizens website, and by tweeting using the hashtag #CitzRising

The event will be livestreamed on the City of London website here, and on Cardboard Citizens’ website here (from 7pm)